How they blew £27million in one night 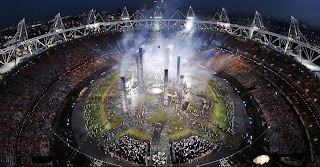 I was determined to hate the Olympics opening ceremony.

£27m could have bought half a dozen full-scale West End musicals, or nearly two years’ public subsidy for the Royal Shakespeare Company. It seemed an awful lot to blow on a single performance. The Isles of Wonder would have to be bloody wondrous to justify that kind of expense.

So when the pastoral opening sequence failed to feature any closeups of sheep – much to the disappointment of my sheep-rearing neighbour, who had come over to our house specifically to see them in HD – and instead we endured hammy acting, wimpy maypole dancing, limp apple tossing, and some unexplained film of rugby players, followed by the self-satisfied image of Kenneth Branagh as Isambard Kingdom Brunel, I was pretty sure I’d be proved right.

Read more »
Posted by Tom Gutteridge at 7:22 AM No comments:

Daddy - the sky is blue! 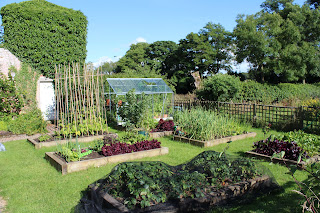 Did everyone enjoy the summer then?

The sun, whose extended visit on Saturday only served to remind us of what we’ve been missing these long wet months, immediately prompted barbecues and shorts to be dusted off across our region. Desperate to get out into the vegetable garden, I couldn’t find any sandals beneath the pile of muddy wellingtons, so I wore socks and trainers with my bright green shorts.

Jo was horrified. She wouldn’t let me even take the rubbish out in case the neighbours saw – she said I looked like a German tourist. Izzy had greeted the day by shrieking with excitement: “Daddy, the sky is blue”. She dragged me into the garden for a closer look.

Read more »
Posted by Tom Gutteridge at 5:43 AM No comments:

Heathrow will be hell today.


Apparently it’s going to be the airport’s busiest day ever, as the first wave of Olympic athletes is scheduled to arrive. They’ll step straight into queues to have their passports stamped by immigration officials with just a couple of week’s training, then on to even longer queues at the lost baggage desks. There’ll be international temper tantrums by nightfall.

Read more »
Posted by Tom Gutteridge at 4:06 AM No comments:

End of a Dream 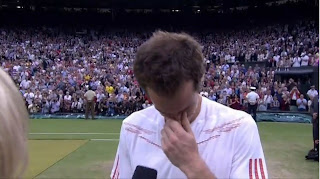 English strawberries and a glass of chilled champagne – what a perfect accompaniment to a Wimbledon final.

To be honest, it was hard to find any strawberries left by the slugs in the garden and I was only drinking Cava, but I was determined to join the rest of the nation in its patriotic fervour.

I tried explaining to Jo why it was such an important day for this most English of traditions, the first time “we’d” reached the men’s singles final since 1936.

“Isn’t he the same guy who lost last year?” she asked, rather dispiritedly.

Read more »
Posted by Tom Gutteridge at 4:39 AM No comments:

On Thursday evening in Wallsend, as a brown river poured through the ground floor of her home, destroying carpets, armchairs and kitchen appliances, 8-year-old Ellie Wood asked, “Dad, is this the end of the world?”

I’m sure it felt like that to a lot of people. On a summer’s afternoon, without warning, the sky turned black and a tower of water dumped itself onto the city. Streets were gridlocked, cars floated around, thousand of people were stranded, all in just a couple of hours.

While the Newcastle Apocalypse was doing its thing, I was standing on a sunny terrace at a reception in London, sipping a cooling Pimms before heading to the station to catch the 7 o’clock home. 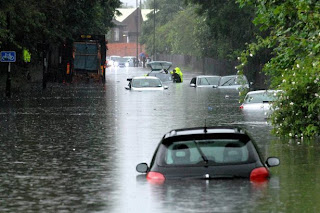 When I answered my mobile, I sensed real fear in Jo’s voice. “Don’t even try to come home”, she warned. “Newcastle station’s shut”. She’d been trying to leave the city for over two hours to collect Izzy from her child-minder, but hadn’t progressed more than a few hundred yards through the deluge; the torrent had reached the doors of the Volvo and cars were stranded all round her.

Even normally unflappable Mum rang to warn me. She’d come out of a matinee at the Theatre Royal and, like Doctor Foster, stepped in a puddle right up to her middle. Apparently you could white-water-raft down Grey Street. After a three-hour bus journey home, Mum’s driver had refused to set her down at the bus stop on the main road, but insisted on driving into the village and depositing the drenched 91-year-old outside her own front door. Armageddon certainly brings out the best in people. 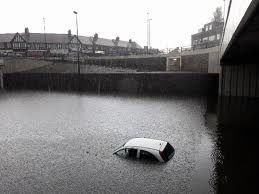 I guess you could be forgiven for thinking the world is in its death throes. After the hottest March, we’ve had the wettest, most unpleasant three months – Spring got lost altogether. The vegetable garden is a soggy, cold reflection of how it’s supposed to be: courgette plants rotting, runner beans too fed up to bother climbing. Izzy’s trampoline sits unloved and mildew-covered – even the dogs prefer their basket to the wet outdoors. I can claim a bumper crop of slugs, though. And what the forecasters laughingly call this “unseasonal weather” isn’t just over here: severe storms have pounded America’s east coast, leaving millions without power in record 104° temperatures.

I suppose we shouldn’t be too surprised. After all, we’ve been warned for 1300 years that the world will end on December 21st 2012 – I guess this is just its dress rehearsal. According to some, we only have another 172 days left of unpleasantness before the ancient Mayan calendar ends, the world gets hit by Planet Nibiru and we get wiped out like the dinosaurs. The Arab Spring is nothing compared to what’s round the corner.

I said this to Jo when she suggested, in desperation, that we use up our remaining air miles and book a holiday somewhere warmer. “There’s no point booking for January,” I said, “though we could actually afford somewhere quite nice because we won’t have to pay for any Christmas presents”.

We spent the next hour musing on what the end of the world will mean. It means this is definitely Andy Murray’s last chance at Wimbledon; Barclays bankers have had their final bonus round so we may as well let them carry on cheating; it means The Voice will never return, Angela Merkel will never be replaced as German chancellor, and I definitely shouldn’t have bothered planting those January King cabbages. Mind you, the slugs have pretty much done for them, anyway.

Then, on Friday, some archaeologists in Guatemala burst my bubble by announcing that they’d found another ancient Mayan text. The good news is the doom-mongers were right: the end date of the Mayan calendar really is December 21st 2012. The bad news is that the calendar starts all over again on December 22nd 2012: apparently it’s just their New Year’s Day.

Yes, there’s really no end to it all: so I guess, as the world keeps spinning into an uncertain 2013, we’re just going to have to grin and bear it.


Posted by Tom Gutteridge at 4:26 AM No comments: