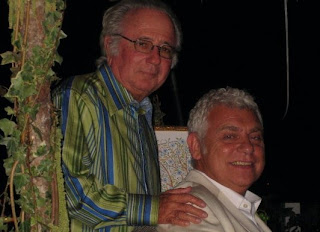 It’s been an emotional couple of weeks.

Weddings are supposed to be stressful affairs, but Jo and I have been fortunate. Instead of the customary panic with caterers and table plans, we’ve quietly enjoyed our Northumbrian summer while the real pressure lay with our generous hosts, my future (now present) in-laws. They’re a delightful, warm couple living in an opulent gated community overlooking the sea in Southern California.

Nothing much happens in Dana Point. The local paper, the Orange County Register, must have the most bored crime reporter in America. “Thousands attend food and fun fest”, declared its front page the day we arrived, referring not to our forthcoming wedding, but to the Orange International Street Fair. On the inside pages, a short paragraph about an unidentified homeless man found dead in nearby marshes (“Police do not believe the death to be suspicious”) was eclipsed by reports of charity fund-raising events. The community is a million miles away from the fires belching black smoke into the atmosphere on the other side of Los Angeles. Here the air is cooler, the sky always blue.

The Pines scarcely blinked when the Gutteridges descended on them: baby Izzy, my boisterous children, and their 88-year-old grandmother. We’re not exactly the quietest of families, but they welcomed us with open arms.

However I think the stress of the occasion finally got to my father-in-law the first night we all got together. He’d commandeered a local Italian restaurant and, inspired by several glasses of Merlot, stood up and made a moving speech welcoming the union of our two large families. Like a scene from The Godfather, his tears flowed with the red wine as he sat down to appreciative applause.

Unfortunately the occasion must have been a little too much for him. His eyes closed and we all watched transfixed as, in agonisingly slow motion, his head lowered itself onto my mother’s chest. She scarcely blinked, but, with calm English aplomb, gently turned to the side, thereby allowing the head to continue its journey downwards into a plate of warm spaghetti. It was a momentous sight.

Jo, of course, was mortified, and immediately ordered me to carry her father to the car and drive him home. It was there that the drama really started. Declaring himself perfectly fit, he stood up, whereupon his legs crumpled, he fell forward and demolished a valuable antique coffee table, then lay moaning on the floor.

Not sure whether her father was injured or dying, Jo dialed 911 and within minutes the sleeping neighbourhood was woken to the sound of fire engines and ambulances. I counted 11 paramedics in the room as they thoroughly checked their patient, then pronounced a good night’s sleep as the best cure for what they politely diagnosed as an allergic reaction to the wine.

The following morning Billy was utterly remorseful. He needn't have been. Generous and open to a fault, we love Billy and I'm proud to have him as a father-in-law, even with his head in the spaghetti. He and his lovely wife Lisa gave us the wedding of our dreams, for which we're truly grateful. More of which later. Whether Dana Point has recovered from either event yet is another matter.

All the excitement must have rubbed off on the rest of the town, for the following morning my son and I were calmly collecting our suits from the dry cleaners when we heard gunshots, the screeching of tyres, and more than a dozen police cars surrounded the motel across the street. Within a few minutes we were in the middle of a scene from CSI. A police helicopter circled overhead, a fat detective with a loud Hawaiian shirt barked orders at officers with fearsome-looking rifles. The Orange County Register reported next day that a man, upset over a breakup with his girlfriend, had opened fire at nothing in particular from his motel room. Now that kind of thing doesn’t happen too often in Morpeth.

After that, the wedding itself was comparatively calm: a warm, loving family occasion with the sun setting on the sea behind us, and a honeymoon shared with my divorce lawyer and Mel Gibson - really (see the next post).

Oh this has really made me chuckle! I can so imagine Etherlie doing that! Glad to hear she was able to spend your special day with you.