Inside the Gates of Hell 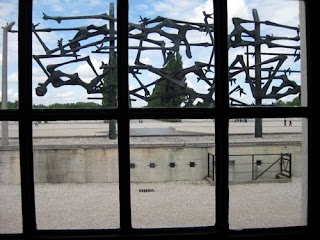 In the gas chamber we stood in silence, taking in the horror.
A camera flash broke the moment, but no photograph could possibly reproduce the sick feeling in my spine: the disbelief that anyone could design with such evil efficiency the death of a fellow human being.

With clothes removed for fumigation in smaller gas chambers, the selected prisoners, told that they were being cleansed and de-loused, would be led into a room with the optimistic sign Brausebad – Showerbath – over the door.

Sure, there were showerheads in the ceiling, but none attached to a water supply. The door was locked and the pellets of Zyklon B, pushed through a small hatch in the wall, would do their work in fifteen minutes of wretching agony. A tiny peep-hole in the wall enabled a guard to check the killing was complete; then the bodies would be heaved out onto the pile waiting f 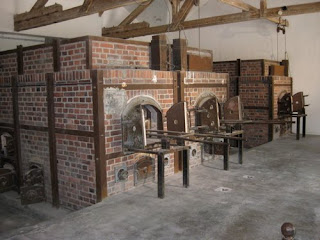 or the ovens next door, cremating all evidence of life to dust.

According to the tourist guides, Dachau’s gas chamber was never used for mass extermination. It wasn’t needed. Dachau was its own killing machine: tens of thousands died from the appalling conditions and treatment inside the camp itself. By the time of the liberation, typhus was claiming those the SS hadn’t worked to death or murdered, and hundreds of bodies were piled against the crematorium door.


Joanna’s parents have been staying with us for the last couple of weeks and while visiting friends in Munich, we all decided we needed to see Dachau. Jo’s family lost many loved ones in the holocaust and I have always regretted not witnessing for myself evidence of this darkest moment in our history.

The words Dachau and death are synonymous. It opened in 1933 just a few weeks after Hitler was brought to power by the unholy alliance of right-wing and wealthy. Originally designed to house political prisoners – the socialists, communists and political representatives of nearly half the German population who had voted against the Nazis – in a few years its function grew more sinister.

Following the institutionalisation of racial discrimination, concentration camps were constructed all over Germany; Dachau, rebuilt to house 6,000, was the model. Jews, gypsies, Soviet prisoners of war, German criminals, priests, dissidents, anyone the regime considered inconvenient, all went through the same dehumanizing process. Stripped of clothes, photographs, letters and any link with their loved ones, they also lost their rights, hope and humanity. They became non-people, so the SS treated them like animals.

The Dachau experience is worse than any horror film. In her pushchair Izzy happily burbled and munched dried apple flakes through the reconstructed dormitories where the emaciated, beaten men, crammed nine to a bed, would cherish the top bunks so as not to face 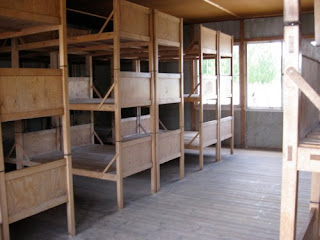 the drip of human excrement from their colleagues who had died in the night. I vowed to her grandfather that I would take Izzy back one day, when she could understand.

Outside the perimeter fence, three bells started tolling. A gate opened into a Carmelite convent, and I stepped inside. A dozen or so nuns were singing prayers, as they do every day, for forgiveness for deeds of the past. I added my own.

Back in Munich, I bought a copy of The Guardian. The front page was about the rise of some British racist thugs calling themselves the English Defence League. Seeking to incite Islamophobia through violence, they are just one reason why we need to look closely at how history can too easily repeat itself. 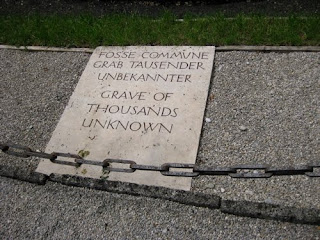 Dachau isn’t just about the Nazis, or the past. It’s a stark reminder of what happens when mankind looks the other way and ignores the seeds of extremism and hatred that lie in the underbelly of every democracy. It’s a lesson our children must learn and never forget.
Posted by Tom Gutteridge at 1:19 PM

Wow! This was written very well and fully expressed my feelings when I visited Auchwitz-Berkanau last year. It is very hard to take in the inhumanity that existed.

I had the same feeling when I visited the Holocause Museum in Washington, D.C. It's mind-numbing.
Well said.

A perpetual lump in my throat as I read this blog entry continues as I write this comment.

My daughter, Dylan, who is 7yrs old was recently introduced to the history of Hitler in her elementary school. We've had a few discussions about his evil and on one occasion Dylan very adamantly stated, "I hope everyone knows about him so no one can ever do this again!" And in spite of my wanting to protect my daughter from learning about such evil consequently she reminded me of exactly why this is a lesson our children must learn and never forget as did you. Thank you, Tom.