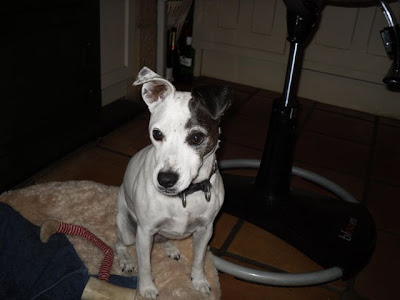 As soon as I heard the question, I knew I was in trouble.

“Babe, please can I ask a huge favour?”

Normally my wife doesn’t ask, she tells. But now she was ringing me at the office for a huge favour? I clearly wasn’t going to like this.

“But our friend is moving to London on Friday so Poppy’s being sent to Battersea Dogs Home, and…”

I firmly put my foot down. “She? Poppy? Absolutely, definitively no way.” We already had two female dogs, one female cat and a one-year-old daughter. That was already more women than any house could handle.

This was below the belt. Muka was the dog that died. I’d taken her to the vet and held her as they injected the blue poison. Her big bat ears were outstretched as she collapsed in my arms. I’d cried so much I had to stop the car on the way home. Jo knows my weakness for dogs with cute ears. I felt my foot, only just put so firmly on the floor, begin to raise itself. Perhaps we might discuss it tonight.

Then I heard a familiar pause. Men can always detect the sound of a guilty woman’s brain. There’s a distinct gap between thought and word while they’re putting together a sentence explaining how the shoes were half price in the sale and the last ones in the shop, or how it was only a little dent in the bumper, or how it had been quite impossible not to invite her mother to stay for six weeks. Then the pause was broken by an unfamiliar bark.

I am the only man in a house of needy females. Apart from Jo, who’s actually rather lower maintenance than her Los Angeles background might suggest (thank God there are no decent designer clothes shops in Newcastle), there’s Truffle and Mabel, the most neurotic spaniels in Northumberland, Poncho, the cat who terrorises both, and Izzy.

“Daddeeeee” she screamed as I opened the front door, and watched her runnning the length of the kitchen into my arms, all wild hair and giggles.

“Daw”, she laughed excitedly, pointing at the new arrival. Yes, there was the daw, lying on a clean blanket in front of the Aga, tail wagging in greeting. I tried to ignore her, but Izzy wanted to tell me all about her.

Izzy’s language is incredibly advanced. She speaks in long flowing sentences of great intensity. If you look away, she pulls your face towards her and forces you to look into her bright blue eyes while she gabbles. I really should capture her language on film and send it to a codebreaker, for the only words I understood were “daw” and “Mama”. Yes, Mama had got a new daw, and Daddy wasn’t very happy about it.

If I was uncertain about Poppy, Truffle and Mabel were devastated. 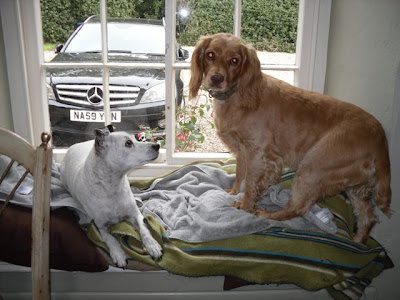 Poppy was clearly used to being top dog. Truffle soon put her straight, but poor, sweet Mabel, was very confused, slinking unhappily round the room.

Then Poppy saw the cat, and went wild. It was just the get-out we needed. Jo and the cat had been inseparable for thirteen years. “You’re right, Poppy must go”, she said. I made us a coffee, opened a packet of biscuits, and began to plan her eviction.

A few minutes later we heard a wimper and turned round. All three dogs were sitting together, staring at the plate of biscuits. Poppy, head on one side, with a large ear sticking out and the other flopped over, slowly raised her paw in supplication.

Jo and I sighed in unison. Welcome to your new home, Poppy.
Posted by Tom Gutteridge at 8:03 AM

Hahaha, this had me chuckling away to myself. You men are such pushovers! I did almost the same thing twice to mine over elkhounds. The first was a puppy and the breeder sent me a photo to ask if I was interested. We had recently lost our old boy so our other was on his own, and the second was litter sister to that one two years later and needed rehoming, strangely we had just put the other old one to sleep after an accident.
It took about two hours of pleading and cajoling by phone the first time but only minutes the second, when he found out she was free!
Oh and I'll look out for your nice car when I'm out and about! ;-)

Oh dear! We really cant help ourselves can we?!!
I would love to go to the cat and dog shelter(I have two cats...Milo and Millie) but I would make such a bloody fool of myself by crying and would want to take them all home to Tynemouth!:)