Ding-Dong! The Witch Is Dead 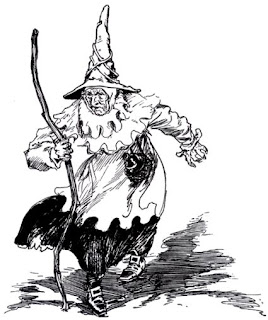 Holed up in the only brick house in town, the three little pigs could hear the wolf furiously huffing and puffing outside.

“Why is he still trying to kill us? Doesn’t he realise he’ll never blow it down?” squeaked the first little pig, still smarting from the loss of his nice straw bungalow.

“That wolf’s insane. He’s ruined our lives and deserves to die”, snarled the second little pig, clutching tightly the few remaining sticks from his own wrecked home.

Just then they heard the sound of growling on the roof. “Oh no, he’s coming down the chimney”, shrieked the first little pig: “Quick, open the cooking pot”. “Wait, we mustn’t kill him,” said the third little pig. “We need to call the RSPCA.”

“Don’t be an idiot”, said his brothers, “he’ll destroy everything. He’ll howl for his hateful wolf family and they’ll come for revenge”. And with that, they took the lid off and the wolf fell into the boiling cauldron.

Just then the phone rang. It was the United Nations. “We hear you’ve caught the big bad wolf. We’d like you to hand him over to the ICC so that he can be brought to justice. He’s a prisoner of war, after all.”

“Go away,” said the first little pig. “We’re having wolf stew for lunch.”

“I’ll handle this”, said the third little pig, picking up the phone, “It’s OK”, he said politely. “I swear by the hair on my chinny-chin-chin he was definitely caught in the crossfire.”

“Yes, he’s in the fire and very cross indeed”, chorused his brothers as they stirred the pot.

When you’re two-and-a-half, morality ought to be straightforward. After the hunter cuts open the wolf to rescue Little Red Riding Hood and her granny, I’m sure I never asked my Mum if they stitched the animal back up. Likewise I never questioned the fate of his pig-hunting cousin. But Izzy caught me out on the day they killed Gaddafi.  I was reading her the Three Little Pigs at bedtime when she suddenly said: “Is the wolf still inside the cooking pot?” Then somehow in my head the stories got intertwined.

I could have answered, “I’m sure the wolf police came and got him out and took him to that animal reserve in Scotland where they’re trying to rehabilitate them back to the wild”, but she would only have snorted, “You’re silly, Daddy”. Instead I told the truth: “He was a very nasty, evil wolf, and deserved to die.” That seemed to satisfy her, though I’ve probably scarred her for life.

Just as the Munchkins sang “Ding-Dong! The Witch is Dead” at the demise of the Wicked Witch of the East, thereby validating the concept of a just execution for future generations of children, so the death of Muammar Gaddafi had the entire Libyan population celebrating, and probably most of the Western world too. Does it really matter whether the perpetrator was a miracle called Dorothy from a star named Kansas, a tornado that dropped a house on him, or an over-exuberant 20-year-old rebel who pulled a gun and shot him in the head? The Munchkins are saved and the world is a better place: until the Witch’s even more evil sister comes for revenge, that is.

In fact, the circumstances surrounding Gaddafi’s death ought to matter to us: we are, after all, supposed to be more civilized than pigs and more intelligent than Munchkins, but Gaddafi was so incontrovertibly evil that even the soggiest liberal finds it hard to care about international justice at this time. There are so many more important issues facing Libya right now. 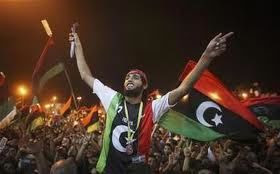 This is a country without identity: it has no institutions, no infrastructure, no concept of democratic process, its wealth has been squandered, its human rights denied for the last forty years. Is it any surprise that the rights of the wolf that destroyed their homeland have been overlooked? Already, the factional rivalries he encouraged are threatening to strangle this new nation at its birth. Let’s hope they can be reconciled.

Libya’s witch may be dead: but there are many more villains huffing and puffing outside its newly painted front door.
Posted by Tom Gutteridge at 3:55 AM