In Praise of The Amateur 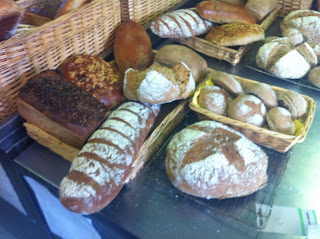 As the piping hot loaves slid out of their little tins, we all cheered. “They’re exactly like shop bought”, one woman said. It was a compliment.

She was right, of course: it’s ironic that amateurs tend to measure success by whether they’ve achieved a professional polish, and yet the reason we six novices were there was because most professional supermarket products are just second rate. I’m talking about breadmaking, a mystery I finally cracked this week thanks to a lady called Carrie Winger. She and her husband own the Allendale Bakery, a small kitchen and café nestling beyond the back of beyond, but which, in the last few years, has won due acclaim for some of the best bread in Northumberland.

This certainly wasn’t my first go at baking. When my last attempt at a sourdough went disastrously wrong, filling the whole house with the rancid pungency of dying yeast, the smell was so bad that Jo had to get the curtains cleaned. She said she was fed up with chipping pieces of cement-like dough off the bottom of bowls, or throwing away flat charred bricks that even the dogs wouldn’t touch. So finally she put her foot down and booked me on a beginners’ course. I didn’t hold out much hope of success, even though Carrie had insisted I bring a large carrier bag to take away my trophies. Frankly, I’d have been happy with one vaguely edible bun.

There were six of us, including a lady whose mother baked every day of her life, and a consultant surgeon, who, like me, had been given the course as a present by his wife. Thankfully Carrie is a very good teacher, watching patiently as the surgeon and I stood side-by-side pommelling piles of sticky dough into submission.

At first my mixture did what all dough has done to me in the past – turn into a gluey, gummy lump. But, against my instincts, and despite my fingers being glued firmly together, I was forbidden to put flour on either the surface or the sticky mess. “Keep it moving, keep kneading”, Carrie insisted, and, miraculously, after ten minutes or more, a transformation took place. The gunk became elastic: I could hold the ball of dough up to the light and it was translucent; I could place it on the surface without having to fetch a chisel.

I’d made my first proper dough and, an hour later, out came a pretty much bread-shaped leaning tower of wholemeal. On the way home, the car smelt of sundried tomato, basil, cheese and onion: a whole bread shop in the boot. Since Tuesday it’s added an inch to my waistline.

I’m proud to have joined the ranks of amateur breadmakers. I hope my loaves always stay lopsided, for at least people will know they’re mine. There’s nothing I like better than the amateur. By which I don’t mean amateurish – far from it: I’ve bought enough spatulas, yeast and organic unbleached flour to run my own café – but I mean that having a go and doing it yourself is an essential part of English country life. 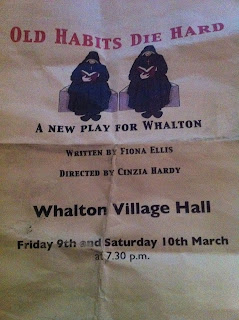 Take amateur dramatics, for example. This weekend saw the year’s theatrical highlight, the Whalton Village Play. Like my dough, the transformation of my next-door neighbour from sheep-rearing, 6 foot 3 vet into a transvestite nun was nothing short of miraculous. His son, just 16, and even taller, was another nun, and his wife was a most eccentric old biddy.

Directed and written by two delightfully enthusiastic and creative village ladies called Cinzia and Fiona, one half of the village was in it and the other half watched it. Fiona Standfield, chair of the professional company Northern Stage, was an alarmingly convincing villain.

The production was what any West End critic would call a romp, the entire cast magnificent. Everyone remembered their lines, the scenery didn’t fall down, and neither did most of the jokes. After a couple of glasses of red wine, we all proclaimed it a triumph.

All it needed was a nice plate of sun-dried tomato buns in the interval. Maybe next year.
Posted by Tom Gutteridge at 11:08 AM