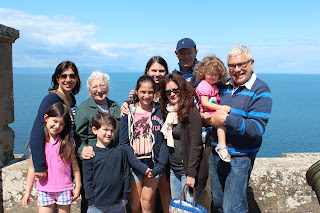 Last night after dinner Mum stood up and gazed skywards as if admiring an unseen deity. Then suddenly, with a speed belying her 91 years, she spun round and flapped her arms like a deranged pigeon.

“The Raven?”, “The Birds?”, we offered, unable to suppress our laughter.

“No, no” she shouted out loud, frustrated by our incompetence.

Once more she looked up and bowed, then resumed her flapping even more wildly. A goose, maybe? Or a very cross swan?

“The Black Swan – that’s three words, not one”.

Playing charades with Granny is like going back to those happy evenings without X Factor and X Box, texts or apps. It’s how life must have been in the innocent days of the Fifties when Elizabeth became Queen. And when I was born.

There are ten of us in this holiday apartment on the West Coast of Scotland. We’re here for Jubilee week – not because we didn’t want to join our English compatriots for their loyal celebrations, but in truth because we hadn’t realised our family party would be clashing with The Queen’s when we booked.

As we drove through Northumberland, people were still draping union jack bunting over fences and telegraph poles. At the border, opposite the enormous blue and white flag of Scotland, a modest union jack implored us to stay in England, but it hadn’t quite made it to the top of the flagpole, which gave it a rather mournful air. Reflecting the impending loss of its blue background, no doubt.

All the bunting in the Scottish villages was plain blue and white, or faded and multicoloured, left over from a thousand village fetes. It looks like Scotland left the United Kingdom a while ago. The BBC isn’t even bothering to put up one of their big public screens in Glasgow: to most people here, the Jubilee, like the Olympics, must be an irrelevant London-centric curiosity.

Despite the lack of royal branding, there’s nowhere that appears more stuck in a Fifties time warp than this part of Her Majesty’s realm. At the local Asda I asked for an aubergine and they thought I was mad: “We don’t sell that kind of thing here”. But they had a good selection of sliced white bread and iced finger doughnuts. I’m glad we brought our own supply of Marks and Spencer’s jubilee cakes. One way or another, I’m determined to celebrate this Jubilee: for I completely missed the last two.

Ten years ago I was the only Brit on an American film set in Mexico, so the Golden one came and went without me. Back in 1977, I was actually directing the BBC’s live Silver Jubilee coverage at Television Centre. On the warmest day of the year we’d filled an enormous studio with a traditional English summer fair, brimful with British clichés. Children wrote special Jubilee songs, everyone wore red white and blue, and we had outside broadcasts from street parties across the land – even from Scotland. Meanwhile the Queen waved cheerily from her coach through the streets of London.

Despite the enormity of the occasion, like all television producers I felt rather disconnected from the real world, and, by the time it was over and I’d stepped into the warm evening air, they were already sweeping up the union jack napkins and empty champagne bottles from the gutters.

So this time, we’re doing it properly, and I’ve brought a red, white and blue shirt and a fake diamond tiara for Izzy. We’ll toast Her Majesty with pink champagne and after the Jubilee cake we’ll probably play another drunken round of charades; Mum will fail to decipher my impression of The Royle Family.

“Give up?” said Mum finally, exhausted with all the flapping.

“Yes”, we groaned, exhausted by all the laughing.

Simultaneously eight of us put out an arm in front of us, impersonating the real superhero.

I hope The Queen is better at charades than my Mum.
Posted by Tom Gutteridge at 3:50 AM