A Bit Of A Week 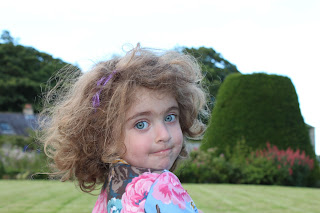 It’s been a bit of a week. Starting with the bull incident.

With expectations of a few blissful days in rural Northumberland, last Saturday the first of several waves of friends arrived from London. We’d promised them gentle strolls through our fields, barbecues with fresh salad straight from the garden, and long snoozes on comfy sofas. The bull had other ideas.

She was up in her Barbie-filled playroom – she calls the dolls “BoyBee”, which makes her sound part Texan, part Irish. Downstairs the rest of us were pulling on wellies while dogs rushed between our legs in excitement, ready for their morning rabbit hunt through the meadow.

Darcy, who’s eight, ran upstairs to see what the fuss was all about. “There's a great big cow outside,” she called down.

We joined them to look through the window. Enormous wasn’t a big enough word for this creature. There, right in the middle of our hayfield, blocking the exit to all our footpaths, was the world’s largest black bull, swinging its tail and stamping down our ready-to-be-mown hay with its front foot. It looked very upset.

We had absolutely no idea how it had got there, or where it had come from.

“Supper!” said my friend, “nice fillet steak on that one”.

“How do you tell the difference?” asked Darcy.

“…a really grumpy expression on its face,” finished Jo, “just like Uncle Tom in the morning.” She added: “And it’s even meaner than a cow”.

According to my wife, meanness is the cow’s most significant attribute. Her fear of all things bovine makes the routes of our country walks rather convoluted. Stories of ramblers and farmers being trampled underfoot have got to her, and she now insists on two clear fences between us and any herd. It’s the main reason why we bought the fields round our house – to ensure cow-free walking for the dogs.

There was no doubt about it: that bull was going nowhere, so neither were we. I rang the farmer down the valley, to tell him his beast had escaped and was now trampling my hay. He was out ploughing something up.

So I rang my neighbour. In the middle of the conversation, the line went dead. The farmer had ploughed up our phone cable.

“So we’re trapped in the house without phone or internet, and a bull outside the kitchen door. We can’t even let the dogs out for a walk,” wailed Jo.

Behind her head, I saw a shadow move past the window. There, preening itself in the sunlight and staring in at us, was a huge rat. It was the first we’d encountered since we moved in nearly four years ago, and it had clearly waited for maximum dramatic effect before introducing itself to the family.

Jo screamed and the dogs went wild – but we couldn’t let them into the garden in case they disturbed the bull. Behind the rat, ignoring the barking, two fat rabbits were munching away at my flower beds.

Just then the doorbell rang: it was a man from Northumbria Water. He handed us a card. We weren’t to drink our water, or clean our teeth with it, wash up, or even give it to our pets, till further notice. Definitely no salad cleaning.

“Welcome to the countryside,” I said to our friends. “We have no phones, no internet, no walks, and no drinking water. But we do have a great view: five tons of Aberdeen Angus and a rat.”

It was at that moment that I heard a voice from the upstairs landing. It was Jo: “Tom, is there supposed to be water coming through the bathroom ceiling?”

Wow, great article, I really appreciate your thought process and having it explained properly, thank you!