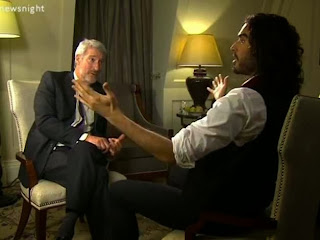 Last Wednesday in a Newsnight interview, Russell Brand told a bemused Jeremy Paxman: “David Cameron says profit is not a dirty word; I say profit is a filthy word, because wherever there is profit there is also deficit”.

He is absolutely right, of course. Back in 2007, you wouldn’t believe what Mr Brand was paid to present a television series called Russell Brand’s Ponderland. That was one stonking profit to Mr Brand, while the balancing deficit was incurred by me and hundreds of thousands of other disappointed viewers who switched off during the first episode. 25 wasted minutes stolen from our lives, never to be repaid. And not a single laugh in the bank.


But that’s OK, because it turns out he’s not actually a comedian at all, which explains why most of us have never found him remotely funny. In the Paxman interview, Brand says he’s an “actor”.

Yes, all this time we thought Russell Brand was an overrated standup. Instead he’s a terrible thespian – which anyone might have guessed if they’d seen his performances in Arthur and Get Him To The Greek.

After a starring, if rather confusing, cameo role on Question Time, this actor was asked to become “guest editor” of the New Statesman for a week, which is why Mr Paxman was sent to a hotel room to interview him. Actually Brand says the only reason he agreed to the New Statesman gig was because an attractive woman asked him. So it wasn’t his beliefs or passion for change, it was his self-proclaimed priapism. Or was that just acting?

It really is one of the funniest Newsnight interviews ever, and if you didn’t catch it you really ought to i-play it. The recovering drug addict-turned-comedian-turned-actor-turned-political theorist wants to start a revolution.

In fact, he says, the revolution is going to happen anyway. For democracy isn’t working. Mind you, Brand doesn’t vote, and has never voted.

“I don’t get my authority from this pre-existing paradigm which is quite narrow and only serves a few people, I look elsewhere for alternatives that might be of service to humanity. Alternate means, alternate political systems.”

And what are these, pray?

“Well I’ve not invented it yet, Jeremy, I had to do a magazine last week, I had a lot on me plate.”

But he’s pretty sure he knows what his new system won’t be: “It shouldn’t destroy the planet, shouldn’t create massive economic disparity, shouldn’t ignore the needs of the people.”

Fair enough, Mr Brand. There is huge economic disparity in the world, there certainly are millions of people who feel disenfranchised, disillusioned and despondent, and you’re absolutely right that with a little charisma and a good scriptwriter they could be stirred up to believe that the current system could be overthrown, but is the destruction of democracy really the way forward?

Didn’t our parents and grandparents fight a war for democracy? And isn’t the only alternative to democracy totalitarianism? Will it be Chancellor Brand, next?

No, he wants “a socialist egalitarian system based on the massive redistribution of wealth, heavy taxation of corporations and massive responsibility for energy companies and any companies exploiting the environment. Any concept of profit should be hugely reduced.”

His language is that of an O-Level essay containing long words almost in context, written by a teenager who’s been given a new Thesaurus for his birthday.

In the middle of Brand’s diarrhetic monologue, Paxman summed him up in just six words: “You are a very trivial man”.

But, in the unlikely event that people start taking Russell Brand seriously, we should remember the words of Franklin D Roosevelt: “Let us never forget that government is ourselves and not an alien power over us.”

Egalitarian isn’t just a long word, Russell, it’s the fundamental principle behind both democracy and the sort of socialism you appear to be advocating. Except that one seeks equality through liberty, the other through restriction and tyranny.

This character assassination of Brand is typical of today’s predictable journalism. Discredit the man and you discredit the argument. The portrayal of Brand as a sexual predator who uses politics to gain sexual fulfilment is ridiculous and obvious twaddle. Anyone who has seen the interview cannot doubt Brand’s political passion or knowledge.

You misrepresent Brand by asking “is the destruction of democracy really the way forward? Didn't our parents and grandparents die for democracy?”

But Brand did not call for the destruction of democracy; he questioned its effectiveness just as our parents and grandparents did. Those who fought for the country during WW2 did so with the promise the inequality and austerity of the pre-war years would not occur again. That health, welfare, housing and employment rights were for all in society and not a minority.

This was a revolution in UK democratic politics. Revolutionary change demanded by the people and forced upon those in power. Like all real change in society it came from below and not through the ballot box. Brand is right. Today, we need a revolution to overturn the corporate takeover of modern politics: a dictatorial democracy where all the parties look and say the same.

So Brand doesn’t vote. That is a democratic choice. The idea voting equates to democracy is simplistic nonsense. Both Hitler and Saddam Hussein were very successful at elections. Do you actually believe people should vote for their own oppression? Catholics in Northern Ireland rejected the vote during the Troubles because they rejected de facto rule from London.

You also scoff that Brand knows “what his new system won't be: “It shouldn't destroy the planet, shouldn't create massive economic disparity, shouldn't ignore the needs of the people.”” Sounds much better and longer-term than recent policies: shouldn’t support the poor, shouldn’t cap banker’s bonuses, shouldn’t maintain the NHS and shouldn’t prevent weapons going to terrorists in Syria.

Oddly enough Mr. Gutteridge you seem to agree with Brand’s assessment of the ills in society but you have little to say yourself. Capitalism is in crisis, yet a recovering drug addict, turned mediocre comedian and actor, upstages the nations journalists; what does that say about journalism today?

I agree with T Bennett.

Me too! Not a huge fan of Brand the comedian/actor but Brand's political views seem to have a ring of truth - not destroying the planet, or creating economic inequality or ignoring the people - surely these issues should top everyone's bill. I think T Bennett puts his own view clearly which is appealing to the masses while Brand attempts to confuse with complicated language which reflects his own ego. T Bennett refers to Brands political passion and knowledge, but what of Bennett's? In essence, what should be termed "The Bennett effect" seems one of sound, in depth knowledge probably from a lifetime of reading,questioning and critical analysis which T Bennett generously shares in understandable terms effecting the likes of myself who begin to question and think about current policies. We need more like T Bennett, who can look past the political and media madness and see the truth.