Chip Off The Old Block 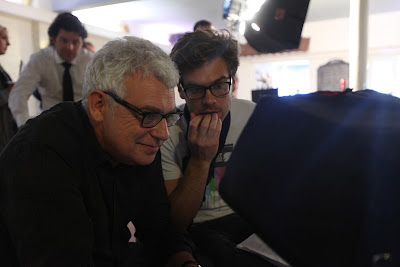 When my eldest son Ben was little, he became a magician.

He called himself Benjamin Bonkers and would entertain our friends’ younger children with toy rabbits and hats. Until, one day, he accidentally set fire to his sister’s hair and Mum banned him from further performances. So instead, Ben set his heart on becoming an actor.

We did all we could to dissuade him. As a producer and director, I know how difficult it is to scratch any sort of living on stage or in front of the cameras. Did he want to be unemployed for most of the rest of his life? The producers have the creative ideas and do the hiring, I told him, the players are mere employees at the bottom of the creative food chain. That’s not strictly true, of course – a good actor can be the making of a successful project – but his mother and I were getting desperate.

After enduring several years of interminable school plays, during which we failed to discern the slightest hint of latent stardom, we finally suggested he might consider following his Dad into a career behind the cameras. Ben snorted with derision at the suggestion. I produced popular down-market shows like Challenge Anneka and Star for a Night: fit only for BBC1 on Saturday nights. He was an artiste. Visits to television studios and location left him cold. We sighed and waited.

Sure enough, after A-Levels, the inevitable happened. He announced that he’d decided to study film and television at university. And, to my great relief, he shone. He has a cinematic eye I never quite developed, and he’s great with crew and actors. He’s directed commercials, won prizes for his short films, and he’s very good with comedy, perhaps the most difficult genre of all. He has a penchant for the surreal which more than matches my own, and this year he finally achieved his first major goal when he was asked to direct an hour-long network television drama. Sure, it was only BBC1 on Saturday night, but his episode of Casualty was a tour de force. It made me cry, and that was the programme, not just the sight of my son’s first onscreen credit.

Last week, en route to the Edinburgh Film Festival where he’s making contacts for his first feature film, he dropped off in Newcastle to give me my Father’s Day present. It was the ultimate gift: he directed one of my films. 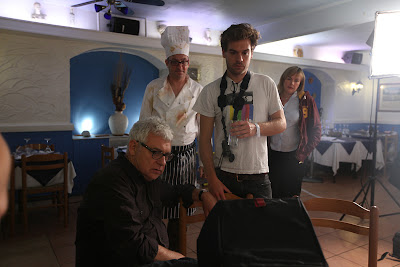 It was just a short project (I say “just – in this recessed climate, any work is useful for a production company), but it was pretty ambitious. It involved all the things Ben is good at, like comedy, actors, and a surreal script. In the kitchen of a dingy basement restaurant in the city centre, with the cast caked in fake blood and sweat, I heard him shout “Action!” for the first time and I can’t begin to measure the pride. We were, for one day only, a father and son team.

It’s hard to express quite how that feels. Working together with your firstborn is something that transcends ordinary human endeavour. Now I think I understand the satisfaction that butchers and grocers must feel as they add “& Son” to their own name above the shopfront. As an old block, it was great to see my young chip bossing around the actors and crew just like his Dad. The weirdest feeling was that he now has my voice. In the edit a few days later, it was impossible to tell us apart.

The final result is as good as I could have hoped for. Viewing one particularly nice shot, I asked Ben, “How did you do that?” Quick as a flash came the response: “It’s not magic, Dad”.  Quite.
Posted by Tom Gutteridge at 7:43 AM

Fantastic - How proud are you? Time to retire Tom and let the young ones take over!! xxxx