After The Riots: Time For An Educational Rethink 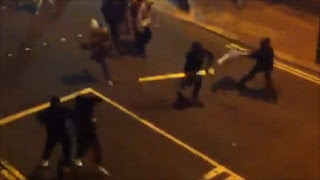 Izzy is already proficient in Maths and English. Actually, that’s a slight exaggeration. To be precise, she can count to 16 (when climbing the stairs to bed) and, when asked her age, replies “I’m two…” before pausing and adding “and a half”.

Although that’s about the only evidence of her prodigy, Jo and I are, as you can imagine, typical proud parents, glowing happily when others say how bright she is.

Long may it last. In just four weeks, she will enter Britain’s educational system via the nursery class at our local state school. From then, we’ll be trusting teachers to help deliver her into adulthood both literate and numerate. If Carol Vorderman has her way, she will be learning numbers until she is 18. And, if I have my way, she will be writing her first novel at 12. And a half.

The events of the past week have turned the political spotlight onto how we bring up our children. 11-year-olds running amok on our streets, arms full of stolen trainers and iPhones; gangs of teenagers throwing missiles at unarmed policemen: where have we gone wrong?

It’s easy to blame parents and schools. I bet you a pair of Nike Air Prestos that most of the parents of the delinquents in the news wouldn’t understand the first concept of responsible parenting, because they themselves were denied it. What boiled over onto the streets of Hackney and Croydon is the product of mistakes by successive generations: not just politicians, educationalists but ourselves, for voting in governments that have done nothing to change the way our society rears its children.

Sadly, for the young people in the courts last week, it’s probably too late: we can beat sticks and apply sticking plasters to cover the mistakes of the past, but it’ll be a tough haul to transform the entire Big Brother/X-Factor/National Lottery generation, where fame and fortune come to the lucky and the loud (or to the dishonest), rather than to those who work hard and respect others.

But where to begin? I think we should start with Izzy’s age group and pressurize the government to add a new requirement to the National Curriculum for primary schools. In addition to numeracy, literacy and science, let’s ensure that our children are taught crucial life skills, like social responsibility, caring and sharing, strength of character, the importance of honesty and respect for other people’s culture and possessions. These are essential moral values that ultimately will underpin a new order in our society, values which can be passed down the generations. Of course, like most middle-class parents, these are things we already teach our kids, but not all children are so fortunate.

When I was 10, about a month before taking my 11+ exam, I was pretty confident. My parents had encouraged me, my primary school delivered, I was a high flyer. In my class there was an overweight boy with ginger hair and freckles called Paul. He was soft, kind and laughed a lot. He also cried when the bullies hit him. One day I found him in tears at the back of the classroom. When I asked what was wrong, he said that he knew that he was “thick” because everyone said so. He would fail his 11+, and he was scared of the big boys at the secondary modern school.

For a month I worked with him after school, trying to teach him things I had mastered at the age of 5. Despite my feeble efforts, he failed the exam, another piece of rejected flotsam on the outer edges of our educational process.

I always wondered what had happened to him. Many years later I found out he had served two years in prison after being wrongly convicted for the manslaughter of a six year old. “Mentally unstable”, they called him in the press. Another inevitable victim of the current system, I’d say.
Posted by Tom Gutteridge at 2:54 PM

Such a hot topic Tom! You are so on the money here and this is precisely why some of us get out of bed each morning. Our system has soooooo failed so very many children. We must keep working together to seed a new form of education - one which nurtures self belief, generates new behavious, develops and explores values, respects alternative views, teaches us to challenge our own thinking (and each others'), teaches resilience, teaches about learning, liberates creativity ...
Instead of helping adults to unlearn their crap, let's get to work on preventing its formation.

Excellent piece Tom. I wrote in my blog about how the impact of bullying had destroyed my education. But I was lucky in that I was taught right from wrong from day one at least. Things have turned out OK. My nephew is bright and capable but his mother is not setting him any boundaries. I am confident he has never heard the word no. While it is good to encourage, it is also vital to let these new kids know that they can't actually have everything they want and sometimes you just have to suck that up.