If I Were Jeremy Hunt 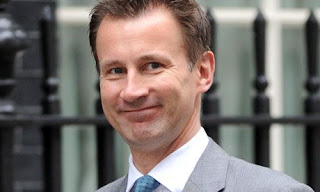 A few weeks ago I was invited to speak at a conference in Salford where our esteemed Secretary of State for Culture and Media gave the opening keynote address. I was booked to reply the following day in a panel session called “If I Were Jeremy Hunt…”

You have to hand it to Hunt: he’s is a tough act to follow. The packed audience of hardened television and radio professionals rather warmed to his wit and assured confidence. Standing centre stage and tieless in a dark suit (it was a media conference, after all), he spoke without notes or autocue, demonstrating the superior, charming, permasmiled demeanour that can only have derived from a proper boarding school education.  Head boy at Charterhouse School (fees £30,534 per annum), first class degree in PPE at Magdalen College, Oxford, president of the university’s Conservative Association, he's the perfect Tory politician. Before last week’s revelations many spoke of him as Cameron’s natural successor.

The audience in Salford were left in no doubt about Hunt’s unerring conviction that, like the rest of Cameron’s cabinet, he is absolutely right about everything he says. He and his colleagues clearly believe that government policy shouldn't be influenced by people who know what they are talking about: industry experts or doctors or the armed forces, or, God forbid, the lifetime's experience of a cabinet minister’s own civil servants.

Being something of an expert myself – if working within the television industry for 40 years counts as accreditation – I felt justified in disagreeing with some of Hunt's policies, particularly his crazy initiative for local television. This was a man whose first task in Government was to tear up Trinity Mirror's fairly won pilot contract to supply a groundbreaking multi-media news service here in the north east of England and replace it with his own barmy plan to hand out television channels to a load of community groups who are bound to go bust in the process.  Trinity Mirror is, of course, the newspaper group that is Murdoch's biggest competitor in the UK.  A coincidence, I'm sure.

Of course the views of people who could be expected to know what they are talking about have never really been taken into consideration when formulating any of this government's policies, which is why most of them are lying in tatters: instead, the cabinet have relied on “special advisers”, and the tittle-tattle of their exclusive clubs and cocktail parties. This is a government that listens to no one but themselves.

The head of a very large media organisation, who is not called Murdoch, recently told me that their senior editorial team was invited to tea at Downing Street for an informal “consultation”, but ended up listening, sandwich-less, to Dave hectoring them for an hour about his plans. Not one of them was asked a single question.

Back in Salford, I’d written myself quite a formal speech in response to Hunt's comments but, having seen the master in action, I stood in the centre of the stage, took it out of my jacket pocket and quietly ripped it to shreds.  This, I think, got me brownie points and quite a few laughs, after which I attempted to restore some balance to the debate about the future of media in our country. I knew exactly what I’d do if I were Jeremy Hunt, and I told them.  Wasting time on hyperlocal television stations wasn't part of my proposed agenda as the next Secretary of State;  listening to the industry and the viewers most definitely was. 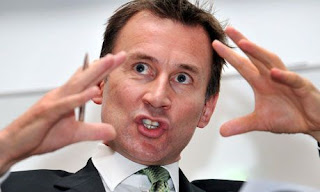 But I confess I was utterly upstaged by the wonderful veteran journalist Gillian Reynolds, who rose to her feet and performed a glorious parody of Hunt himself: she portrayed a man who loves himself more than he’ll ever love the electorate, preening, smiling, perfect, who neither cares nor understands the common man, a professional politician who, like all his cronies in this Coalition, is utterly out of touch with reality. She brought the house down. 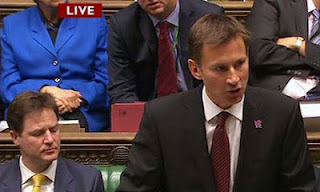 What a contrast to see him in the House of Commons last Wednesday: embarrassed, halting, his head buried nervously in a carefully constructed statement, Cameron and Osborne squirming uncomfortably behind him. Here was their own firewall self-combusting in front of them, caught out by his deviously fawning “special adviser” and his own closeness to the Murdoch dynasty, any pretence of “quasi-judicial” impartiality utterly busted.

I guess he’ll try to wriggle out of it to the very end, but I know what I would do right now if I were Jeremy Hunt: I'd resign.
Posted by Tom Gutteridge at 3:55 PM