Dawn of The Sun 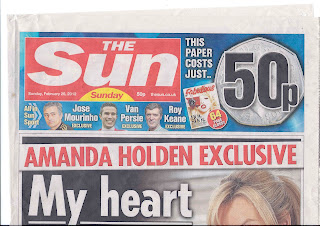 [Rupert Murdoch launched a Sunday edition of The Sun this morning, following the demise of his News of the World title]

The newspaper delivery man was insistent. “The paper quality’s good – heavy as The News Of The World”. Now there’s a man who knows class journalism when he feels it.

I’d gone to the village store early in case there was a run on the Sun on Sunday. I needn’t have worried: piles of them sat unloved, despite their 50p price tag.

I guess he was surprised to see me loading up with tabloids; I’ve always been a strict broadsheet buyer. They’re so much more substantial, especially good for lighting fires through the rest of the week. This time of year it’s so cold I can normally reach the Appointments section by Saturday, but with Newcastle forecast to be as warm as St Tropez this week, my new collection of tabloids will probably suffice.

I confess I’ve not been a fan of Sunday tabloids since I was 19 and the Mirror ran the headline “Students In Sex Film Shocker” about my university film. Mum was mortified – we got hate mail and everything.

It was all a bit of a misunderstanding. I’d made a little film called Corridor with some money from the local arts association, about life in a university hall of residence. It was supposed to be a comedy.

The camera travelled along a corridor (hence the title), peeking into each room in turn: the usual naïve stuff, certainly nothing to win an Oscar. It was a silent movie though, so perhaps I was 40 years ahead of The Artist.

The camera reached the bathroom, wherein a voluptuous blonde called Mary Jane lay up to her neck in Matey bubbles, attempting to seduce a thin bespectacled geek called Dan. She failed, and the camera moved on. We all thought it hugely funny, but shortly afterwards I got a call from a freelance journalist who wanted to ask about my “sex film, made with an Arts Council grant”.

“Was the girl naked?” he persisted after I tried to defend the raison d’etre of my oeuvre. “Well yes, but you couldn’t see through the bubbles”, I reasoned. Nevertheless, the following week, Fleet Street struck and I was instructed to organise a private viewing for the Vice-Chancellor. York City Council even called a special meeting so the councillors and their mates could see it. At the premiere there were queues round the block. The following morning the Yorkshire Post splashed the disappointed headline “Why All The Fuss Over This Film?”

Yesterday’s inaugural Murdoch paper failed to match even that level of journalism. There were five pages of a “World Exclusive” with Amanda Holden, a page of fashion tips from “style guru” Nancy Dell’Olio (seriously!), and a column from super-mammaried intellectual Katie Price. It was like an in-house magazine for celebrity has-beens.

There was also a column from the Archbishop of York entitled “Sentamu’s Sunday Service”, though I’m not sure it wasn’t ghosted, for I can’t imagine him actually writing “Today is a new dawn…When I think that we can now get the latest news, politics and sports stories seven days a week from our country’s favourite paper, all I can say is “WOW!”

I found the Sun a bland reflection of its predecessor. No sex and drugs exclusives, no investigative backbone, unless you count Katie Price’s admission that she can’t book tables at restaurants under her own name because they fear she’ll bring down the tone.

The People fought back, even hiring ex-NOTW columnist Carole Malone to spout her deranged nonsense. The three competing tabloids each had 40 pages of sport, only of which one was devoted to Newcastle United. The rest should light a lot of fires.

“Do you want something to actually read?” said the delivery man. “Yes please”, I said, and he handed me a copy of the Sunday Sun, the local paper produced here in Newcastle.

Its 4811th edition was witty, compelling, and an incomparably better read, with just as much sports coverage – almost entirely about our local teams. There was a whole page on yesterday's mock funeral for the "death" of the St James Park name. 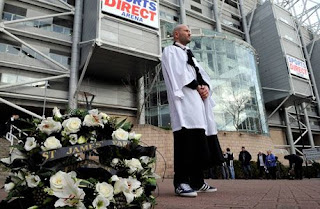 If it hadn’t been for the launch of the other Sun I wouldn’t have bought it. So thanks, Mr Murdoch: for me a new Sun has indeed dawned.
Posted by Tom Gutteridge at 8:10 AM