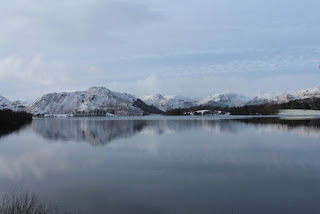 I could sense Jo’s growing panic as we listened to the weather forecast. “Maybe we should just cancel?” she suggested. “Nonsense,” I said. “We have four-wheel-drive, and it’s just over the hill”.
The hill in question was the North Pennine range that separates us from Cumbria: we’d booked a weekend in the Lake District and I was determined to enjoy it.
Mum was insistent: “You must take a shovel, blankets, lots of spare clothes, hessian sacks, a flask of hot tea, enough food for two days…” the list was endless. With pressure from three overwhelmingly persistent women – Jo, Mum and the Sky weather girl – I loaded the car with enough provisions for an arctic expedition. Despite Jo’s misgivings – over breakfast she wanted me to check that our wills were up to date – we set off into the unknown.
We felt like brave explorers as we sped along the Military Road towards Carlisle. The roads were empty, the sky heavy with impending doom. The local traffic news was sombre – snow from the West will engulf the entire region, traffic will be immobilized, you have been warned. “We just have to get past Haltwhistle by midday, that’s the highest point”, I said reassuringly, wondering if the hotel would reimburse us if we didn’t make it through.
We reached the top in half an hour. “There”, I said with a sigh of relief, “it’s all downhill from here”. That’s when it started snowing.
It’s an appropriate metaphor, of course. Having just reached the summit of my own life by passing the milestone of my 60th birthday, I’m only too aware of the double meaning of the phrase “it’s all downhill from here”. By rights, the next few years should be a breeze – a ten-year glide down the gentle slope towards comfortable retirement. Fun weekends in nice hotels, country walks, foreign travel and the opportunity to enjoy the rewards created by forty years of hard uphill slog: with Izzy and Jo by my side, it should be a relaxing amble towards the twilight.
Or perhaps the bad times are only just beginning. Will the road get even tougher as I encounter the snowdrifts of old age? With a toddler just starting out, and a 14-year-old whose mother has just put him into an expensive boarding school, I can’t see the welcoming hamlet of retirement anywhere on the horizon. I’ll be working till I drop, and through the multiple troughs of a double-dip recession too. Perhaps it really is downhill from here.
It was as a teenager in school camp that I learnt that going downhill is every bit as hard as the ascent. “In mountain climbing, there are more deaths from the descent than the climb” keen teachers in khaki shorts bellowed at our disappearing shapes as we fearlessly tore down the slopes towards the waiting bell tents and burnt cocoa in the valley. They showed us how to keep our knees together to protect our ankles. It slows you down and hurts your shins like hell but it stops you breaking your legs, apparently.
So, with the flakes getting heavier, I gently edged the Volvo down the hill towards Greenhead.  Within minutes, the snow miraculously stopped. We made Ullswater in another forty minutes and the sun was shining. “There’ll be some red faces at the Meteorological Office tomorrow”, I said. “What were all those warnings about?”
On Sunday morning the lake was calm and majestic. The spectacular view of the lightly frosted hills spread before us as we breakfasted.  The Sunday newspapers were full of the snow chaos throughout England -- indeed, it seems to have fallen everywhere except on top of us.  Let's hope I have the same luck for the rest of my Sixties.

Sharrow Bay Hotel’s menu cards carry the inscription “60th anniversary: The Diamond Years”. Sadly it’s not wearing too well since its owners, the Von Essen group, ran out of money. Now it’s like a favourite old pair of slippers: worn but comfy. I guess that’s what happens when you’re sixty: you need regular makeovers to avoid gradual decomposition.
Speaking of which, I really must do something about all those emergency rations, slowly rotting away in the boot of the Volvo.
Posted by Tom Gutteridge at 2:34 PM

You can never be over prepared for a trek to the Lakes tho' - and congrats on the big six oh.
;-)