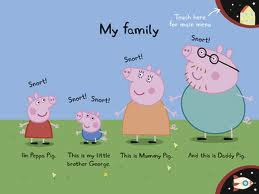 Early on Saturday morning the sleepy calm of Newcastle’s Grey Street was shattered by excited screams from hundreds of tiny theatregoers. They were there for a rare performance by Britain’s latest superstar, Peppa Pig.

For those without toddlers, I should explain that Peppa and her little brother George, who live in a cartoon cottage with their overweight parents Daddy Pig and Mummy Pig, enjoy celebrity status with every pre-school child in the land. You can tell this porcine phenomenon has taken off because its national tour around our regional theatres has sold out.

According to Jo, Daddy Pig is modeled on me. Personally I don’t see the resemblance: he has a circular tummy, gets grumpy when he loses his glasses, is hopeless at odd jobs around the house, scared of spiders and pretends to be an expert on everything: “I’m a bit of an expert” is his catchphrase. Whenever he appears on television Izzy screams out “That’s you, Daddy”.

I have to admit that this performance in the Theatre Royal was probably the most exciting event in Izzy’s life to date. The sight of the Pig family driving onstage in their little car had her bouncing in ecstasy – though I only saw a tatty set with half a dozen actors carrying puppets scarcely resembling the characters they were supposed to represent.

Polished it most certainly wasn’t, but the promoters used every trick to empty our pockets: illuminated whirry things for £7 instantly became a must-have accessory for every child; a gratuitous interval encouraged us to buy Peppa handbags and ice cream; then, at the show’s climax, Peppa found some golden balloons, which magically appeared for sale in the foyer for another £4 a pop. We blew over £60 in an hour and a quarter.

But for Izzy, it was a memorable first trip to a big theatre. I will never forget mine: it was Close The Coalhouse Door at the Flora Robson Playhouse in Newcastle. I was 16, and it cost 2/6d with a special discount coupon from Northern Arts.

I suspect there are thousands of people in the north east who share my nostalgia for that special play. Written by Alan Plater, with haunting music by Alex Glasgow, it uniquely captured the spirit of our region. I’m seriously excited about this year’s revival by Northern Stage and Live Theatre, with additional material from Lee Hall, who wrote The Pitman Painters. This theatrical highlight is being directed by Samuel West, the son of our national thespian treasures Timothy West and Prunella Scales. Earlier this month Jo and I found ourselves sitting next to Sam at Northern Stage’s glamorous annual dinner.

One of things I find most endearing about my wife is that, despite having lived in this country for almost seven years, she remains oblivious to British celebrity culture. As a result, going to industry events with her can be rather dangerous.

A few years ago she spent more than an hour talking to Oscar-nominated actor Tom Conti over dinner before asking him “And what do you do for a living, then?” As Pauline Collins was sitting next to him, I assumed Jo had never seen Shirley Valentine. So I knew we’d be in for some delightful confusion when we saw the seating plan for the Northern Stage event. Sam, an extremely successful actor and director, clearly loved the fact that Jo hadn’t the slightest idea who he was.

“Does your Dad work in theatre too?” she asked, as I tried to whisper in her ear: “His father’s incredibly famous – he was Edward The Seventh”. Still she ploughed on: “How old is he?”.

When Sam replied that Timothy was in his late seventies she said sweetly “you must bring him to the house and we can introduce him to Tom’s Mum. She’s 91 next week, but looks much younger: maybe they’d hit it off”.

Sam paused, smiled politely, then said with unflappable charm “I’m sure that would be delightful, but perhaps my mother would have a view.”


I spent the rest of the evening giggling at the image of Sybil Fawlty angrily storming up to Mum’s cottage with a frying pan to retrieve her husband. Now that would make good theatre.
Posted by Tom Gutteridge at 9:11 AM